Previous Next
DEF Diesel Fuel Trailer? Some things to consider.

We are frequently asked about making a DEF Diesel Fuel Trailer. The reason it’s a question is very simple: DEF must remain unconatminated in the field.

The handling of DEF is a sensitive matter.  DEF exposed to extreme temperatures can be an issue as well. DEF freezes at 12 degrees F. DEF begins to degrade at temperatures above 85 degrees F, and is extremely sensitive to UV rays.

We encourage producers to keep minimum amounts of DEF at their farm or in their transport vehicles to protect their investment in DEF. Producers have a enough things to be concerned about on a daily basis, so making sure a farm hand has properly stored DEF each and every night shouldn’t be added to the list.

We would rather see DEF kept in the containers it is distributed in for safety reasons. DEF is meant to be handled in a closed loop environment. DEF is currently being distributed in:

These options are the best options for storing and transporting DEF to the field to avoid contaminations issues.

Should there even be a DEF diesel fuel trailer?

If the producer/enduser has considered the limitations of introducing one more tank to the process of getting DEF to the field then the answer is yes.

Producers and end users want the convenience of filling up the DEF and diesel tanks in their vehicle at one fill-up.  Since it’s been our experience that tractors and equipment requiring DEF have not consumed DEF at the rates that most thought they would when DEF was first introduced, the DEF refill tank does not need a large capacity. 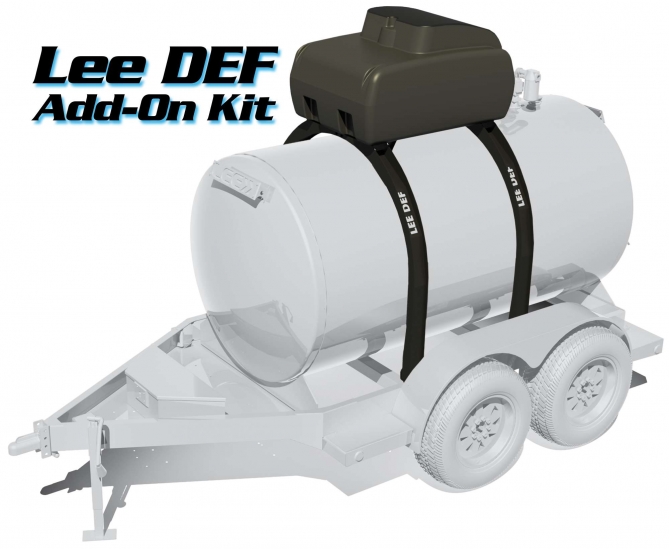 We offer a DEF system that is made by Enduraplas.  The 55 Gallon DEF tank kit is self contained with pump and nozzle and is considered a closed loop system with Micro Matic fitting. The pump included in this kit is powered by 12volts and is able to pump DEF into to the tank and with the turn of a valve you can easily pump DEF out of the 55 Gallon tank into your equipment.

The fill opening, pump and nozzle are enclosed in a safe and secure compartment at the top of the tank to protect from contamination. Our DEF system will fit current models and can be added to past models of our diesel fuel trailers. We offer the 55 Gallon DEF tank kit for all 4 models of our fuel trailers.

The DEF tank is mounted on top of our fuel trailers for several reasons.

DEF is one of the most sensitive chemicals to dirt and contamination on a farm. We did offer at one time DT475 and DT975 DEF diesel fuel trailers. We discontinued this because the DEF tank and the pump/nozzle were located right behind the pickup on the tongue of the trailer that was being pulled down dirt roads increasing the risk of contamination.

We have seen designs from other manufacturers that leave the DEF nozzle exposed without any protection from the dust and dirt that is produced by traveling down a dirt road. Our offering secures the nozzle in it’s own compartment.

A full DEF tank and no fuel in the fuel tank yields too much tongue weight. This is why we designed the DEF tank to be mounted on top of our fuel trailers, ensuring that whether empty or full the weight will always positioned right over the axles.

We do find more and more that producers/endusers are using the containers mentioned above that have proven to be the standard and the safest option for storing and transporting DEF to the equipment in the field.

However, of all the alternatives to putting a DEF system on a diesel fuel trailer our DEF solution is among the safest options available.